It's virtually impossible to have contact with other people and not catch a cold from time to time as the viruses are so common.

What happens is that the cold virus replicates in the lining of the nose and when a person who is infected coughs or sneezes they inadvertently spray the virus out into the air in tiny droplets of mucus.

This can then be breathed directly in, or picked up from wherever it lands (on a handrail, doorknob, telephone etc) and unwittingly transferred when the next person touches their face or eyes.

Research has found that people who exercise regularly are less likely to get colds.

The study of over 1,000 people found that during the 12-week winter study period, those who exercised on five or more days a week had a greatly reduced chance of developing a cold compared with those who did very little exercise. And, if someone who exercised regularly developed a cold, there was a good chance that symptoms would be less severe than someone with a cold who did little exercise. One theory behind this is that exercise helps boost the immune system. 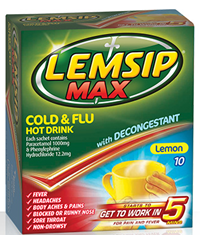 Check out some other cold related articles!

Always read the label and use only as directed. Incorrect use could be harmful. If symptoms persist see your healthcare professional. Reckitt Benckiser TAPS NA6601